The road to effective treatments for Alzheimer’s disease has been littered with failures. However, clinical trials of lecanemab supported by Bath ASU have been heralded as a breakthrough -So what’s different this time?

It is easy to see why big Pharma has focussed and invested so heavily to develop therapies for Alzheimer’s disease (AD). The disease is the most common cause of dementia, not a normal part of aging, and presents a major health issue with the patient population only set to grow. This is currently an incurable neurodegenerative disease mostly affecting elderly people, although an early-onset form can also affect younger people. In both cases, it is characterised by progressive dementia leading to loss of autonomy and ultimately death. In short, the effects are devastating to both the patients and their families.

Alzheimer’s and the brain: A tale of two proteins

In 1906 Dr Alois Alzheimer described microscopic changes in the brains of affected patients now called plaques and tangles, which are caused by changes in two proteins: Beta amyloid and Tau respectively. Plaques and tangles are thought to play a critical role in disrupting the communication between nerve cells and the processes they need to survive. Given the limited availability of data in humans however, it has been difficult to understand whether these changes are a cause or symptom of AD.

Dozens of clinical trials of monoclonal antibodies results have shown results that are disappointing or mixed at best. Aducanumab did achieve marketing approval from the Federal Drug Agency in the United States in 2021 although that decision was controversial, and the European Medicines Agency refused to allow it, doubting its effectiveness.

How is lecanemab different?

Lecanemab differs from other monoclonal antibodies in late-stage clinical trials for AD in two important ways: its structure and target. Firstly, where other antibodies have two binding sites (bivalent) lecanemab has been carefully engineered to have six binding sites (hexavalent).

The novel structure of the antibody increases its size from the regular 150 kDa to around 250 kDa but also increases its strength of binding to the target, possibly due to a reduced rate of dissociation from it.  A more in-depth description of the structural features and avidities of lecanemab has been published by its designers if you want to read more [1].

Secondly, although many drugs (including aducanumab) target beta amyloid (Aβ) protein, lecanemab was generated specifically against synthetic Aβ protofibrils. Aβ proteins can exist in several forms including soluble monomers which aggregate progressively to form oligomers, through protofibrils and then insoluble fibrils, as represented in Figure 1. Protofibrils are soluble aggregates of Aβ monomers between 75 and 5000 kDa in size that are thought to be key pathogenic forms of the protein responsible for synaptic and neuronal degeneration in AD. Laboratory comparisons between lecanemab, aducanumab and gantenerumab have shown that lecanemab has the strongest binding affinity for Aβ protofibrils of them all. It has been suggested that rather than binding plaques directly, lecanemab is most effective through depletion of soluble Aβ protein in the brain. This leads to a shift in the equilibrium between different forms of Aβ, causing more protein to solubilise off plaques.

Although lecanemab is a clear step forward for AD therapies much more research remains to be done in areas that could bring additive or synergistic improvements, for example:

What about Tau? Clinical trials using both antibodies and vaccines that target Tau fibrils are currently on-going. Additionally, some studies are testing antibodies that target both Aβ and Tau pathology, due to the similarity of their abnormal oligomer form.

Antibodies in the brain: The blood brain barrier normally prevents large molecules from reaching the central nervous system, meaning only a fraction of infused antibodies reach their target in the brain. The use of alternative technologies such as generation of microbubbles via focused ultrasound, or new antibody formats such as bispecific antibodies, could help deliver antibodies to their target.

Diagnostics:  Most clinical symptoms of AD appear years after the development of internal signs of disease such as plaques and tangles. This means diagnosis is (too?) late, which may partly explain the inefficiency of current treatments. Work to improve early diagnosis, for example by developing new biomarkers would be helpful.

Minimising side effects: Severe side effects, including vasogenic oedema and microhaemorrhages, attributed to bapineuzumab’s Fc effector function caused clinical trials to be terminated. Engineering of antibody Fc regions to silence this function could prevent side effects.

Results from clinical trials have shown lecanemab’s potential to slow cognitive decline in Alzheimer’s patients. Excitement surrounding the data comes in part from the fact that this is the first clear demonstration that targeting the formation of plaques in the brain will be an effective therapeutic strategy. Lecanemab is not a “magic bullet” or the end of the story, but a clear step toward effective AD therapies that are desperately needed by patients and their families. 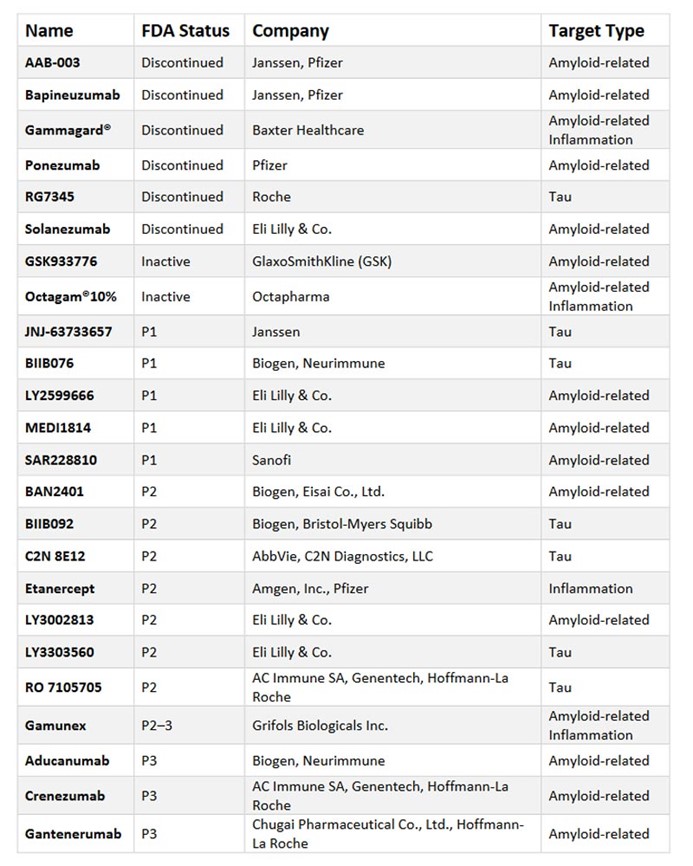